The Ungrateful game of Golf

Four holes to play. Four shots lead. Adam Scott had played beautifully all four days. He was ready to become the 2012 British Open Champion. Then, suddenly, the collapse. Adam Scott bogeyed the last four holes and gave the trophy away to Ernie Els. 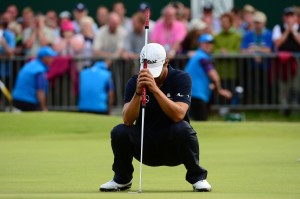 What is it about golf that makes it so difficult and creates so much variability in the performance of a player. Well, it is actually pretty obvious to anyone who realizes that 1) It requires extreme precision on every shot and 2) every shot can cause a debacle. Especially at the PGA tour level.

Plus quite frankly there is a component of luck involved in sinking in 10+ ft putts, or chip shots, etc and at the end, 1 or 2 shots can make the difference in golf.

Now, and maybe more importantly, you have to add the exponential component of focus+confidence. Adam Scott missed a very short putt on the 16th hole which caused the second bogey. Which then put Ernie Els only 2 shots behind. Which probably caused Adam’s mind to think, “I could screw this up”. Made him loose focus and confidence. Then bogeyed 17 after a bad approach shot. Less confidence, less focus. Done deal. Extremely difficult to recover from that.

From Glory to Shame

In soccer for example, players make mistakes all the time. Some of those mistakes are expensive, but most are not. In baseball, same thing, except maybe the pitcher. Football, you have 3 chances every time. Bowling is one of the few I can think could make that much difference.

If you look at the shot distribution of amateurs, you typically find that the most shots are lost on a few bad holes. Is not like they double bogeyed most holes to shot 98. Most likely the par a few holes, and bogeyed some others. But the bulk always goes on the 8′s and 9′s that show up a couple of times per round. And screws everything up.

So what? Is there anything I can do?

Well yes. There are many things you can do, if you have the discipline to do so. As an amateur you need to admit that 1) you are going to miss shots and 2) you are not going to hit miracle shots with a high successful rate.

Once you accept those 2 facts you will make better decisions after a bad shot. Settle for the bogey or d-bogey with a fair state of mind. That will give you a better chance of a good bounce back for a par on the next hole. But if you triple or worse, it will be a lot harder to do good on the next hole.  Maybe that could be the difference of you kissing the trophy.

By the way, study shown that out of all stats tracked at the PGA Tour, the “bounce back” showed one of the highest correlation with success at the PGA Tour. “Bounce back” is measured by the percentage of times that a player shots a Birdie after a Bogey or worse. For the typical amateur player this can mean hitting a Par after a D-bogey or worse.

This entry was posted in TheRange Blog and tagged free golf handicap, golf handicap calculator, golf handicap tracker, golf scorecard picture service, TheGrint. Bookmark the permalink.
Cancel Reply
TheGrint Golf – Ryder Cup Feature
Ryder Cup Feature The Ryder Cup will be played on September 2020. The US Team vs The Europe Team will…
Total Golf Trainer – 3.0 “Beast Mode” – TheGrint Golf
Total Golf Trainer - 3.0 "Beast Mode" Alright, this is it! final post of this series. And yes we had…
2018 New Features Releases from TheGrint Golf
Our releases in 2018!  As Golf evolves, TheGrint does too! You have heard this phrase... "100% of premium memberships goes toward…
Increasing Distance Is Increasing Club Speed – TheGrint Golf
Increasing Distance Is Increasing Club Speed Is your driving distance making it hard to play golf?  Does your 7 Iron…
New App Release – TheGrint Golf
New My Courses Feature in TheGrint App We are excited to announce a brand new section of our app that…
Improve Your Impact and Minimize Penalties – TheGrint Golf
Improve your impact and minimize penalties! This is our second blog post of this series. The below video with Michael…
How is my TheGrint Golf Handicap Calculated?
How Is My Golf Index Calculated? The Handicap System is not hard to understand, but there are many miss-conceptions about…
Need to Hit more Fairways and Greens in Regulation during your Golf Round? – TheGrint
Do you need to hit more fairways and greens in regulation?   In this series of blog posts we partnered with the…
Golf Off-Season – TheGrint
It's the sad time of the year again... The Off-Season is here! So we want to remind you how the…
Here are the 10 reasons why having a Golf Handicap is essential to any golfer
Everyday more and more golfers realize why having a Handicap Index is so important, but Do you know why? We…
CREATE YOUR FREE ACCOUNT JOIN US