The Presidents Cup History by TheGrint

The History Behind The Presidents Cup

The First Presidents Cup was in 1994 at the incredible Robert Trent Jones Golf Club in Lake Manassas, Virginia. 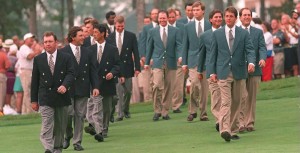 Incredibly, this “tradition” was something almost from one day to another. Mr Deane Beman and Tim Finchem discussed this idea of the Presidents Cup at the beginning of 1994, and a few months later, they were already playing it for the First Time.

Since then the Presidents Cup has been played 10 times, where the US Team has won 8 Times and there has been 1 Tie.

This Year the Presidents Cup will be played at the Jack Nicklaus Golf Club in Incheon, South Korea, starting on October 5th.

This is how the Teams are selected:

USA Team:
- The top 10 U.S. players who earn the most FedExCup points, beginning with the 2013 BMW Championship through the 2015 Deutsche Bank Championship, with points earned in 2015 doubled.
- And two Captains selected on September 8, 2015

International Team:
- The top 10 international players (excluding those eligible for the European Ryder Cup team) from the Official World Golf Ranking through the conclusion of the 2015 Deutsche Bank Championship.
- And two Captains selected on September 8, 2015

If you want to learn more about this really cool Tradition in Golf, you can go to the Presidents Cup Website, get the latests News and read more about its History.

Blog written by LadyGrinter
This entry was posted in Golf Stories and tagged golf, golf history, presidents cup. Bookmark the permalink.
Cancel Reply
Scrambling: Par Saves % by Handicap
For this edition of Data Nuggets, I'll be walking you through a very important aspect of any golfer's game: Scrambling.…
How To Link Scorecards in TheGrint App
If you've played with a group of Grinters, you may have realized that if you kept track of scores for…
How To Edit Playing Handicaps
As you probably know already, whenever you start a round using TheGrint app it automatically sets each player's Course Handicap…
Scorephotos in TheGrint App
The team is extremely excited about a new feature that will help make your rounds, even more memorable by adding…
Most Photographed Golf Courses in TheGrint App
As you probably know already, you can upload pictures of your round from TheGrint App. These will appear in your…
TheGrint Tour – A Golf Tour for Amateurs of all levels
One of the most incredible aspects of TheGrint app is the community that we have built thanks to you. The…
PRO Membership Benefits in TheGrint App
Our entire team is crazy proud of our app. The stats you can keep an eye on, how easy it…
Most Used Games in TheGrint
Playing some side bets during a round of golf is a pretty common occurrence between golfers around the world. It…
Golf Games to Play in TheGrint App
It's a pretty common thing to do some side bets before starting your round. It makes the game a bit…
Easter Eggs in TheGrint App
As a team, we're extremely proud of the amazing capabilities our golfing app offers. From # of putts to fairway…
CREATE YOUR FREE ACCOUNT JOIN US